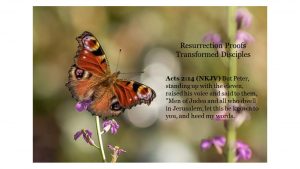 Acts 2:14 (NKJV) But Peter, standing up with the eleven, raised his voice and said to them, “Men of Judea and all who dwell in Jerusalem, let this be known to you, and heed my words.

Perhaps the impact of lives transformed by a risen, resurrected Lord.  We see that Peter who had previously denied the Lord three times, now becomes what the Lord had prophesied he would be, a leader and a foundation stone for building the Church of Jesus!

These early disciples of the Lord were empowered by the Holy Spirit because Jesus arrived where He said He was going (to the Father) and that they and we would and could be endued with power from on high.

History attests that each of the disciples lives were transformed to the point each of them were martyred for their faith in a RESURRECTED Lord with the exception of John.

Today is Maundy Thursday, which celebrates the last Last Supper Jesus had with His disciples before the crucifixion.  Let this be a day, as with the two walking on the road to Emmaus, where our eyes are opened and we begin the process of transformation as well.

I serve a RISEN SAVIOR and He’s in the world today and you can too!