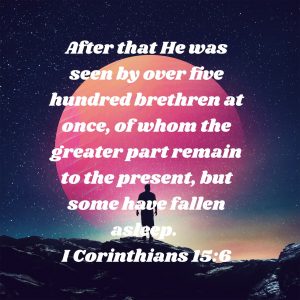 The Law required any judgement either for or against an individual be “by the mouth of two or three witnesses the matter shall be established.” (Deut. 19:15)

The conspiracy theory that the disciples conjured up the Lord’s resurrection is laid to rest by the fact He was “seen by over five hundred brethren” in just one occurrence.  Paul states that many of those who had seen His resurrected body many were still alive at the time of his letter to the church at Corinth.

The facts are sure and certain, Jesus did raise from the dead after three days of “self-quarantine”.  He’s ALIVE and is seated in a position of authority and honor next to the Father.

An chorus we used to sing at this time comes to mind “Alive, alive my Jesus is alive”.  Yes and millions of believers serve this “risen Savior”.

Have you received Him as Lord, as Savior?  You can and be raised to newness of life in Christ!