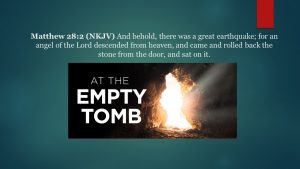 Matthew 28:2 (NKJV) And behold, there was a great earthquake; for an angel of the Lord descended from heaven, and came and rolled back the stone from the door, and sat on it.

It’s surprising that there are still many pundits that discount the Resurrection of Jesus.   There are a number of proofs from scripture that attest to this historical event.

An initial proof is deals with the stone being rolled away.  Recall in the final verse of the previous chapter the chief priests requested a Roman seal be placed on the tomb where Jesus had been laid.  Had anyone broken that seal, they would have been placed to death themselves.  There wasn’t anyone who broke the sea, rather an earthquake came and broke the seal and an angel of the Lord moved the stone.

What is the importance of the seal being broken and the stone rolled away?

As we face the current challenge of COVID-19, remember the stone is rolled away because He isn’t in the tomb any longer – He is ALIVE.

Let’s declare and decree He is Alive!