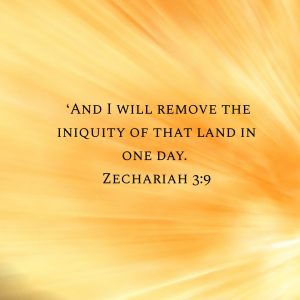 Zechariah 3:9c  and I will remove the iniquity of that land in one day.

The word of the Lord through Zechariah speaks of a last days revival where nations and peoples will come to the Lord. Could the current events be a precursor to fulfilling what He spoke?

24 hours and an entire nation will be cleansed, coming to faith in Jesus!  WOW!

Since God says that a nation, with thousands of people, will come to faith in a 24 hour span of time, GOD CAN TURN THIS VIRUS THING AROUND IN 24 HOURS AS WELL.

We hear the prognostications and forecasts as to the duration, flattening the curve and a spike with those infected and possible deaths; yet the Lord can turn this around.  I am not minimizing the seriousness of what we are confronted with.  But we serve a God that is greater than any crisis we are facing or will face.

The Church, the ekklesia – the called out ones, must stand in faith rejecting fear and declaring God’s will to every principality that would assail (Eph. 3:10).