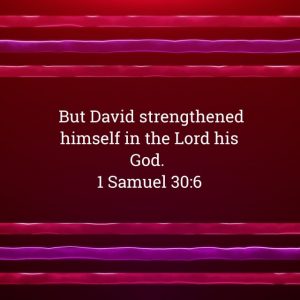 What is our response when confronted with impossible situations, when those that are in hearts turn on us?  We’ve all been there!  David gives us a template on how to strengthen or encourage ourselves in such a time.

First in such times our personal relationship with the Lord is vital.  David received his strength/encouragement from “his God”, not his parents, pastor or friend.  Undoubtedly this was cultivated in his heart while tending sheep as a shepherd.

Third he was endued with strength by not only hearing, but acting on the promise of the Lord that he would find and recover those that had been taken captive.  I confess the Word daily, yet confession can’t be a substitute for doing what we’ve been directed to do.

Later in this chapter, verse 18, we discover “David recovered all that the Amalekites had carried away”.

Encourage and strengthen yourself in the Lord!