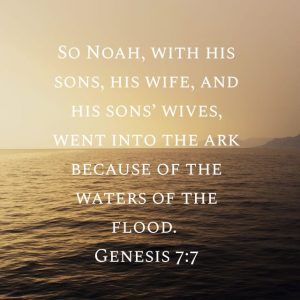 We see the historic account of Noah and his family in the ark, which is substantially different than the most recent Hollywood production that was a vain attempt to depict this event.

That doesn’t mean we aren’t affected by it, but we’re above it and will come through into a new living way; provided we hold fast to Him Who saved and redeemed us.

Safety and security is based on right standing in the midst of a decadent culture. Noah was 600 years old when he stepped into the ark. The Lord shuts in those He has provided for. We’re “shut in” from the evil affecting our spirit man; we aren’t shut off from the culture in which we’re called to serve and minister to.

The prophet Jeremiah reminds us (chapter 29) we have cultural responsibilities to minister initially through intercessory prayer as we prophetically declare blessing.