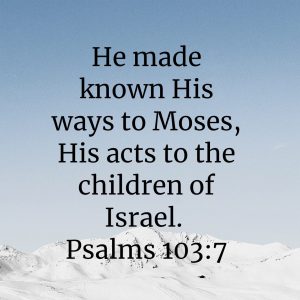 Psalm 103: 7 He made known His ways to Moses, His acts to the children of Israel.

Beginning our journey of faith in the Kingdom we are often attracted, drawn to the acts or works of God; the signs, wonders, miraculous.  That is an ongoing personal passion that signs and wonders will follow the minister of the Word.

In Kingdom growth there comes a yearning as how those “acts” happen, if you will what are the “ways” in which those become not only frequent, but the norm.

The following verse we catch a glimpse of what contributes to knowing “His ways”; the course or mode of operation with “His acts”.

Being merciful, graciousness, slow to anger and abounding mercy are four strategic keys to walking in a dimension of knowing His ways.  Especially to those who are not able to reciprocate the giving of mercy, grace and patience.

Two groups that are included, according to James (1:27) are the “widows and orphans”.

“Lord show us Your ways of mercy, grace, patience so that we may abound with mercy!”