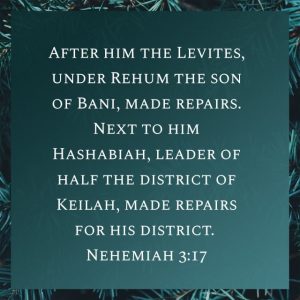 Nehemiah 3: 17 After him the Levites, under Rehum the son of Bani, made repairs. Next to him  Hashabiah, leader of half the district of Keilah, made repairs.

The phrase “next to” is found twelve times with the phrase “after him” being found fifteen times.  Nehemiah uses them in describing the manner in which the wall was rebuilt around Jerusalem after captivity in Babylon.  It was no easy task as there were distractions, disruptions and attempts to stop them from fulfilling what God had directed them to accomplish.

“Next to” means “their hand was open”, referring to whatever one person had was available to their neighbor to finish their task.  “After him” speaks of “having their back” as a means of mutual protection.

When facing crisis or challenges who has their hand open to you, who has your back protecting you from sneak attacks?  Who do you have your hand open to?  Whose back do you have.

The point being no one is called to battle or building alone.  Find those you can be “next to” and “after” and stand together.