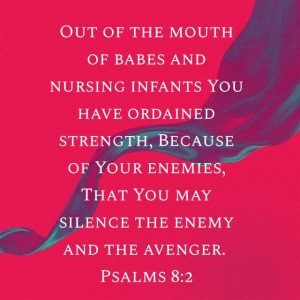 Psalm 8:2 Out of the mouth of babes and nursing infants You have ordained strength, Because of Your enemies, That You may silence the enemy and the avenger.

There is incredible power released in praising the Lord.
If this portion of scripture sounds familiar, it is because Jesus quoted this verse in His earthly ministry with one word changed. Matthew records the account of Jesus entering Jerusalem on what is referred to as “Palm Sunday”. One final visit to the temple that brought a cleansing by the Lord in response of seeing the Temple being a place of merchandise, instead of what it was intended for “a house of prayer” (Mt. 21:13). In an attempt to mask their indignation of their personal financial empires being exposed, with contempt they asked if He hadn’t heard “Hosanna to the Son of David!” It is the Lord’s response to their question Jesus quotes David’s words we read in Psalm 8, with a significant change of one word. The Gospel account renders the word “strength” (David) as “praise” (Jesus).
There is power in praising the Lord. In context of what David penned, praise has the power to “silence the enemy and the avenger.” Whether it be an enemy/foe/adversary or one who has a grudge desiring to destroy character and/or life; praise is our weapon of choice because it puts eternal rest our antagonists.
Currently we are hearing and seeing blatant accusations leveled at and in every sector of our culture. Reputations are being tarnished, often on the basis of skewed at best and outright lies at worse; especially directed toward those who are Christ followers at a global and national level.
As saints of God we need to resist and reject the notion of retaliation, stooping to the low level tactics of enemies and adversaries. What is our response?
PRAISE THE LORD! This kind of praise is THE sacrifice of praise, the fruit of our lips.
Praising the Lord can break bondages and open doors. The apostles Paul and Silas jail house revival are evidence of such truth. The walls of Jericho are testimony of impact of praise. When the praise leads the way, the enemy is defeated.
Praise the Lord and be a victor!