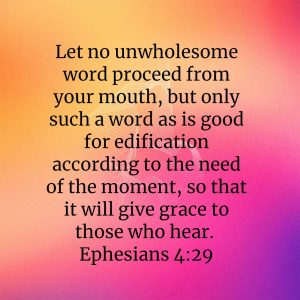 Eph. 4:29  NASB  Let no unwholesome word proceed from your mouth, but only such a word as is good for edification according to the need of the moment, so that it will give grace to those who hear.

Many have prayed for the Lord to touch the hearts and lives of those who are high profile personalities.  My prayers would read something like this “Lord touch so and so, they could influence so many people for Your Kingdom….”

In recent years we’ve witnessed this particularly in sports, where at the conclusion of the last 2 NCAA National Championship football games, winning quarterbacks both gave clear testimony to the Lordship of Jesus on national television.

The last several weeks the secular and church community have been mesmerized with the radical testimony of Kayne West on late night television and this past weekend in Houston at Lakewood Church.

May we heed the words of Paul to saints in Ephesus about speaking “only such a word as is good for edification according to the need of the moment”.    This salvation encounter with Jesus by one of the most recognized names in the entertainment industry could very well be the catalyst for a revival across our nation.

Listening to his visit with Joel Osteen from this past Sunday, he was very clear about repentance and placing faith in Jesus Christ.  There’s little doubt that there were nay sayers when the writer of Ephesians and nearly two thirds of the New Testament shared about a Damascus Road encounter with the Resurrected Christ.  Yet because of accepting this murderer, we have incredible revelation of the love, grace, mercy, compassion, forgiveness of Almighty God.

I would suggest we pray for Kayne, his family and those closest to him; for protection, wisdom and discernment.  That he has a mentor that will keep him accountable and growing in the wisdom of God.  That we pray for those who have already been impacted by his testimony that they would encounter the Living Lord in a personal way and not just jump on a band wagon.

Finally, let’s pray for others to have radical encounters with the Lord Jesus Christ that seem unlikely and/or impossible.  That may be a family member, friend, neighbor, work associate or politician.