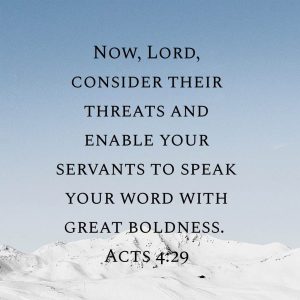 Acts 4:29 “…..grant to Your servants that with all boldness they may speak Your word”.

One of the most glaring distinctive traits of the early disciples of Jesus was boldness!  Whereas prior they were insecure, intimidated and fearful; as a result of the empowerment by the Holy Spirit (Acts 2), they become bold as lions.

Peter on the day of Pentecost before thousands of people publicly declaring the Gospel, Peter and John at the gate to the temple boldly speaking restoration to a lame man and now in response to an attempt by the politically correct caucus they pray for increased boldness to “speak Your word”!

A great need in the called out ones, the Body of Christ, in our culture is a boldness to speak the Word of the Lord into people and over circumstances personally and nationally.  Not a cocky arrogance, rather a confident boldness that comes from knowing the Christ, the Son of the Living God.

Be bold and speak – out loud – His Word and His Will!